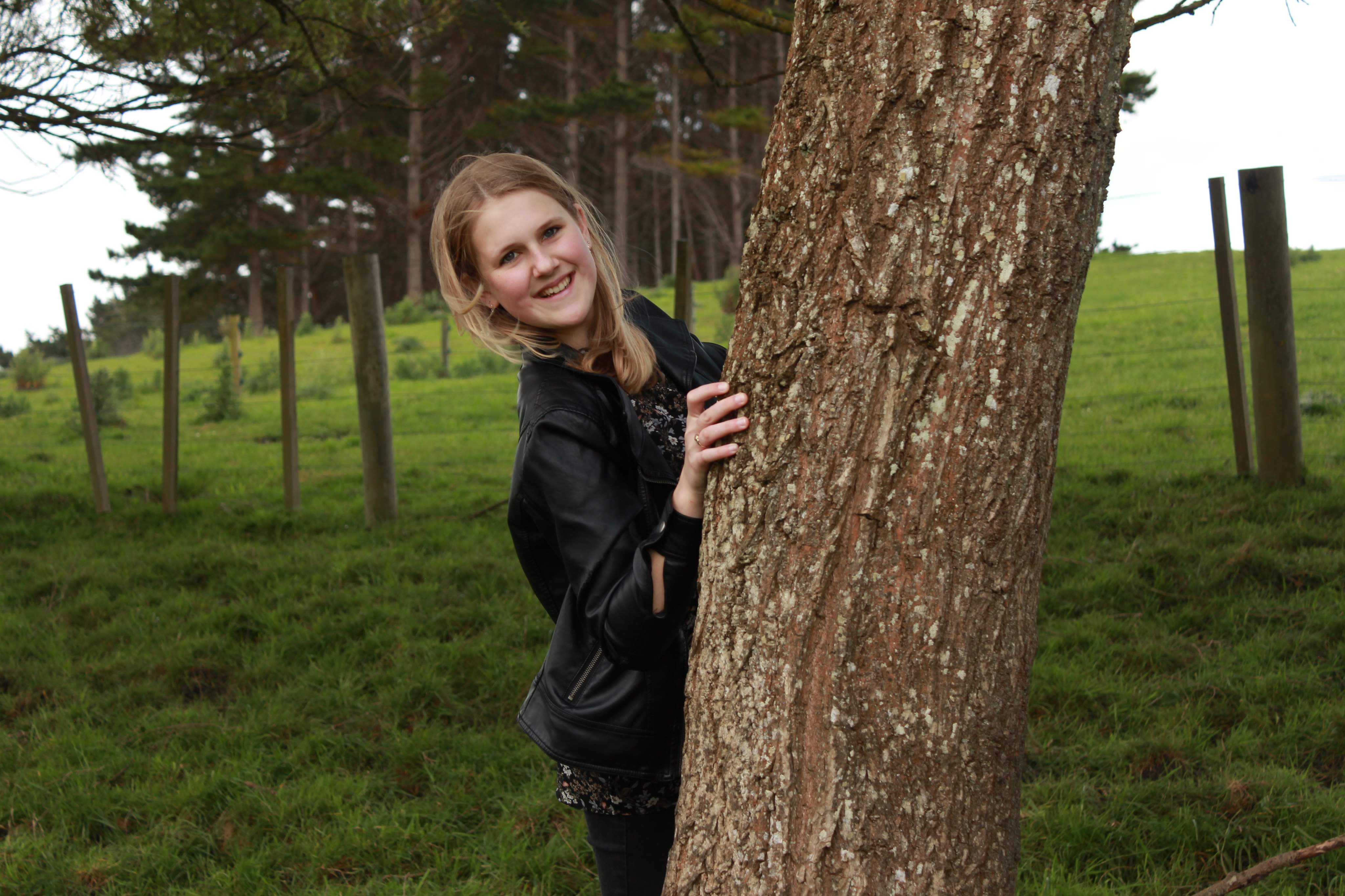 There are several music sharing pages that I often visit on the internet, both to promote my own songs and to listen to songs by other independent musicians. An instrumental piano composition shared on one of these pages immediately caught my attention. I listened to it and wrote my comment. The composition’s owner replied my comment in a few minutes and thanked me. In return, she listened to one of my songs. After a brief conversation, I offered to interview her on my blog someday. couldn’t wait to answer my questions but asked if we could do this interview after her new album was released, she said. As of the end of October, her album was released, and only a few days later, she answered my questions with great sincerity.

Her name is Holly Baines, she lives in New Zealand. She released her first single ‘Train to Berlin’ when she was only 15. She then released the songs ‘last moment’,’Regrets’,’The time we had’,’Winds of time and ‘London Bridge’. Although she says that she’s inspired by soundtracks, I think the music she makes is more beautiful than the most movie soundtracks. Let’s get to know her more:

Can you tell us a bit about yourself? Especially for those who haven’t heard about you yet

My name is Holly Baines – I am a 17-year-old British solo pianist/composer and I am privileged to live in New Zealand. I play the piano as my first instrument but I also enjoy playing guitar and Cajon as well as attempting to play any others which come my way. I am a Christian first and foremost, and a composer/musician second. I have played the piano for as long as I can remember, thanks to my dad teaching me and my mum making sure I practised. I also have seven siblings, six of whom are younger than myself. As part of a very musical family, music is my heart and soul and I couldn’t imagine living without it. Although instrumental music is my focus, I also play and sing as part of two un-professional bands with my siblings and cousins.

It’s all about piano for sure, but What’s the story behind? How did you start playing the piano?

My dad is a solo pianist/composer and as such he taught me how to not only play music but also how to create it myself. Ever since being a little kid watching my dad just sitting down and playing the piano, I have always dreamt of one day being a composer myself. I have been very blessed to have been surrounded by a variety of rich music all my life, and the wide range of music styles that I have listened to over the years has definitely shaped my style, especially the film scores and soundtracks.

How do your family and friends react to your passion of music? Who is your biggest supporter?

All of my family and friends are super supportive and love my music. They often ask me to play and are very excited when I release new compositions. My biggest supporters would probably be my parents and it is due to their encouragement, feedback, and teaching that I was ever able to learn and compose my own music.

How did you decide to let people hear your music? Some people would hide their talents for years just because they think that it’s not easy to handle all the process.

I think that having a professional composer as my dad really helped me during the whole process as I was able to have a great headstart and gain so much wisdom and advice from the wealth of knowledge that he had learned over the years. If I had been trying to do it all myself, I definitely would not have been able to get any music out there for a much longer amount of time. Being able to have the help and mentorship of my dad really made the whole process possible and meant that I didn’t have to ‘go it alone’. And I think as well, I had always wanted to one day be like my dad, so that always pushed me forward and helped me to get really excited about releasing my own music for the first time instead of being afraid to put my compositions out there for everyone to hear.

What’s the inspiration or motivation for you to write such amazing songs?

Generally, I just sit down at the piano and play and compose/improvise as I go along, rather than having any inspiration beforehand. Sometimes I will choose a key or chord that I want to use, or sometimes I want to create something using a unique phrase, for instance, a melody with lots of octaves in it, and then I just go from there. However, for the majority, I simply sit down and play my heart out. The only composition that was specifially inspired by something is ‘Sanchez’. This composition was inspired by a scene in the film ‘USS Indianapolis: Men Of Courage’.

Days Gone By is your debut album. Are you excited about it? Are there any names you’d like to mention such as people behind this project?

I am absolutely thrilled with this album and so grateful for everyone’s support and encouragement. I would, first of all, like to thank God for giving me the ability to play and compose in the first place, and second I would like to mention my parents, Kris and Becky: their encouragement, feedback, and support are what made it possible for me to release this album. My siblings were also such a blessing as they listened to the album several times before I released it, and gave me their feedback and thoughts on each piece.

For those who never heard your works, which song would be the best to get familiar with your style? I think that would be Winds of Time. But I’d like to know what you think.

I would definitely think that my newer pieces would better represent my style, in particular, the soundtrack-esque compositions. As such, I would point people to one of three pieces that I would say are my best – Bluejay, When You Return, and Sanchez (also my three personal favourites).

Any thoughts about the future? Is there anything you specifically would like to achieve?

I love composing solo piano music but my aim is to become a professional soundtrack composer. At the moment, however, I am mainly focussing on more solo piano music, with the potential of some instrumental backing/remixes while I work on orchestration behind the scenes. A dream of mine is to compose a film score, and I would enjoy to create piano and percussion driven soundtracks. I would also really like to do more performances live, especially over in Europe (as I am British) and America (as the majority of my fans are there).

Okay, I’ll be boring and ask you just because… Well why not. Which 5 words can describe you best?

Indeed you’ve heard few of my songs. What do you think about them?

Although I generally don’t listen to much EDM, I did enjoy listening to your music. My favourite is ‘You’ as it is a more similar style to my own.

Any final thoughts? Something I didn’t cover but you would like to add

I would like to thank you for being so interested in and encouraging about my music. I will be working on another album that I will aim to release next year and some cinematic remixes will hopefully be in the works sometime soon as well.

You can listen to her new album ‘Days gone by’ below